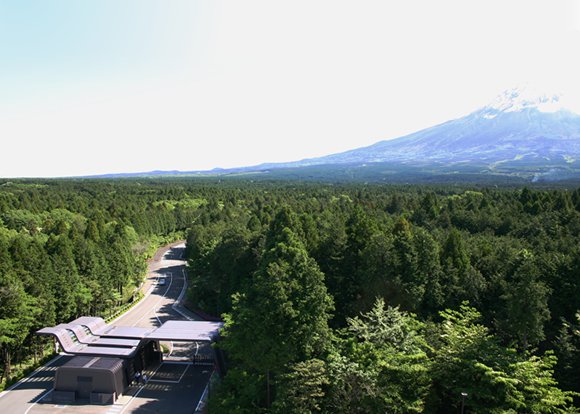 Approximately 60% of Fujinomiya Work's site, which is approximately 429,800m², remains as forests. And approximately 80% of them are artificial forests of “Japanese cypress.” Since it has been 40 to 50 years since the trees had been planted, we are planning to aggressively improve the forest into a forest rich in plants and animals. 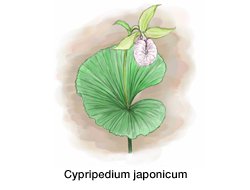 Approximately 700 species of plants have been found on the Fujinomiya Works premises. When we re-organized the forest next to Factory #2, we found trees such as konara oak and Japanese snowbell, and also the plant Cypripedium japonicum designated as a category II (VU) endangered species by the Ministry of the Environment and Shizuoka Prefecture. 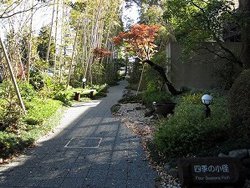 The bamboo grove along the headquarters building was redeveloped as “Four Seasons Path” for the employees to come and relax. Trees that wild birds and butterflies love are planted with good balance and please the eyes of everyone throughout the four seasons. 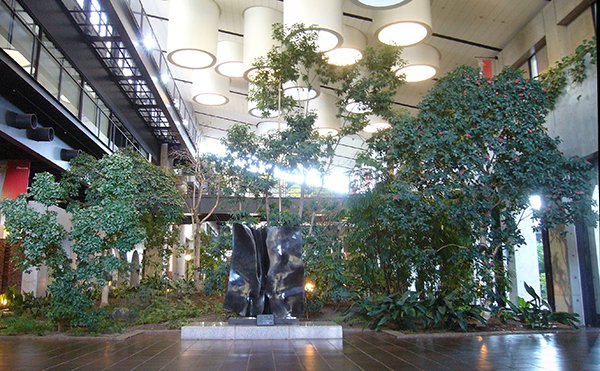 At the Isehara Works, we work on creating a workplace with the concept of "Harmony of water, green and stone," and also focus on indoor greening.
To keep the trees indoors, the metal halide lamps on the ceiling are used to supplement the illuminance, and the upper lights on the ground are used to supplement the geothermal heat. Furthermore, we have developed technologies such as improving the soil and drainage by making the ground a two-layer structure, and improving the air permeability in the ground by using pipes. As a result, we were able to reduce the light intensity to about 1/10 of the light originally required by the trees, and also we were able to grow Japanese trees that are difficult to grow indoors. 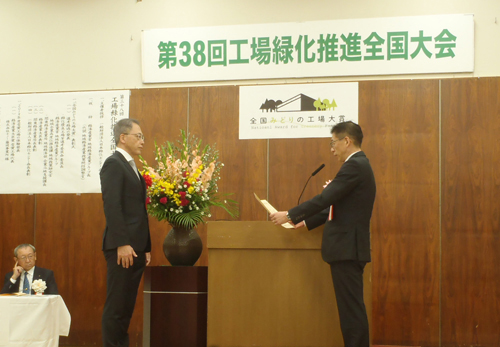 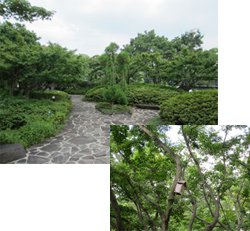 The rooftop garden near the Isehara Works main building was created about 35 years ago.
It started with a handful of trees, but there are now several dozen.
A variety of birds can be seen in the garden, and great tits have been noted in the nesting boxes there. 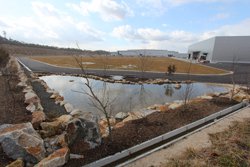 The biotope at the Toki Works was designed to facilitate the effective use of onsite spring water, and also as a small reservoir for irrigating plants. It covers an area of 200m2 and holds approximately 100 tonnes of water.
The pond is heart-shaped when seen from the above. Local granite known as mino kurama are used around the edges of the pond. 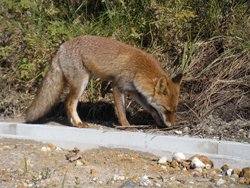 Water, greenery and stones come together in harmony at the biotope, which also serves as an oasis for the company employees. Even foxes make occasional visits here.